Replacing your computer system, again and again, isn’t all that easy now, is it? It’s too much of a hassle, plus your bank balance will surely not appreciate this entire burden. And for that very reason, you should invest in a low-profit CPU Cooler to prevent your processor from overheating.

After all, thermal throttling is usually the reason behind the drop in performance and the short lifespan of a computer system.

So, which low profile CPU Cooler should you get?

Well, this article focuses on detailed reviews of some of the best low profile CPU Coolers for you to check out. You can then choose whichever option suits your requirements.

The ARCTIC Alpine 11 is a compact cooler that can be used for systems with a TDP of 70 Watts. Since it can draw air from the side and has a low profile, the Alpine 11 GT is a great option for small form factor PCs.

The Alpine 11 features an ultra-quiet 80mm PWM fan. The fan runs at a speed of 500-2,000 RPM. Moreover, it is equipped with an optimized heat sink which contributes to the Alpine 11 GT better cooling performance.

It features both a low noise impeller and a patented fan holder. This makes the Alpine 11 GT a virtually silent cooler even at its full speed.

Meanwhile, the PWM control allows you to adjust the speed of the fans according to the temperature of the CPU. And so the noise levels are minimized, making this cooler a silent option.

Moreover the ALPINE 11 comes with a unique mounting system that includes push pins. This makes it easier to install and offers excellent stability.

The cooler comes with a pre-applied ARCTIC MX-2 thermal compound, as a result the process becomes a lot quicker and cleaner. 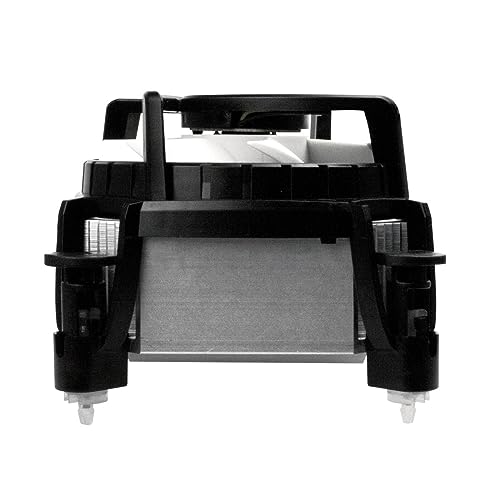 The Noctua NH-L9i happens to be a small air-based cooler with a height of 37mm. However its size makes it the ideal choice for HTPCs, ITX, and other Small Form Factor builds.

This cooler comes equipped with the NF-A9x14 slim 92mm fan. It is specially designed to cool lower TDP processors and it even comes with PWM support for automatic speed control.

Moreover, it includes the Low-Noise Adaptor, which allows the cooler to operate at extremely low sound levels. You can use it at low levels down to 14.8 dBA.

The NH-L9i is also compatible with almost every RAM module out there. It is built to fit into every type of motherboard.

However, the Noctua NH-L9i might not be the best low profile CPU Cooler for overclocking though.

And it is possible that the NH-L9i’s color scheme might not be your cup of tea. This CPU cooler comes with light tan colored casing and has a reddish-brown fan. 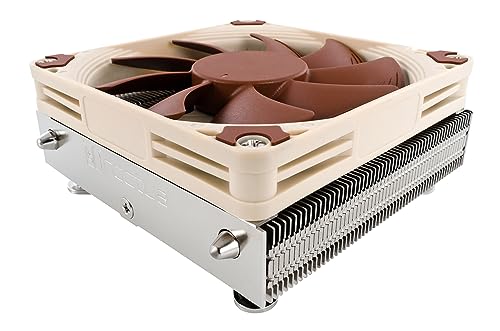 The Noctua NH-L9x65 is a compact low-profile cooler with a height of 65mm, thus making it an ideal choice for HTPCs, ITX, and Small Form Factor builds.

It features four heat pipes instead of the usual two heat pipes.

The NH-L9x65 is a lot more powerful. It is compatible with both RAMs and PCI on Intel-based ITX mainboards. Hence, this cooler does not overhang the near-socket connectors on the motherboard.

It also features an optimized NF-F12 120mm Focused Flow fan, the PWM allows for speed control. The NH-L9x65 also features the low-noise adaptor, which allows it to runs remarkably quiet.

This CPU cooler comes with a SecuFirm2 multi-socket mounting system that makes it easy to install.

However, this particular cooler is not suitable for overclocking. And so it should not be used on CPUs that have a TDP more than 84W. 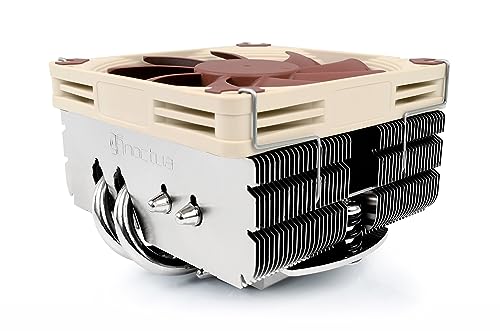 The MasterAir G100M is about 74.5mm high, which makes it a lot bigger in size compared to some other options. However, it is a good option for small form factors and HTPC.

It also features an RGB Ring which illuminates the cooler.

Both the RGB Ring and the fan are certified compatible with the motherboard vendor’s RGB software.

The Cooler Master MasterAir G100M comes with a heat column. This allows a good amount of heat to transfer, as it increases the direct contact surface area. Since this cooler has a compact size, it can deliver better cooling performance.

Moreover, the MasterAir G100M is a colorful option if you’re looking for something that happens to be aesthetically appealing.

It comes with a wired RGB controller, which allows you to customize colors and different effects for the fan. This cooler does not require an RGB board as it comes with a remote control instead. 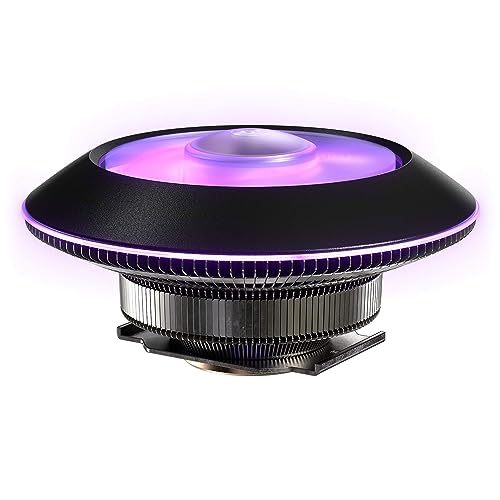 The BK002 is comparatively taller than other options; it is about 75mm. However, the BK002 is still small enough to fit inside the most of mini-ITX builds without any issues.

This CPU cooler can accommodate processors that have TDPs as high as 130W. It also has a 120mm fan on it, which allows it to work well for mild overclocking.

It comes with a 120mm Pure Wings 2 PWM fan that helps in keeping the system cool. The fan is equipped with airflow-optimized fan blades and also has a durable rifle-bearing. It also has a lifespan of 80,000 hours to boot.

The be quiet! Shadow Rock LP is also equipped with a sturdy heat sink as well. This features about 54 aluminum fins on the top and 32 fins on the bottom.

Moreover, this cooler comes with 46 mm copper heat pipes for effective heat distribution. It also features a user-friendly mounting from atop the mainboard. 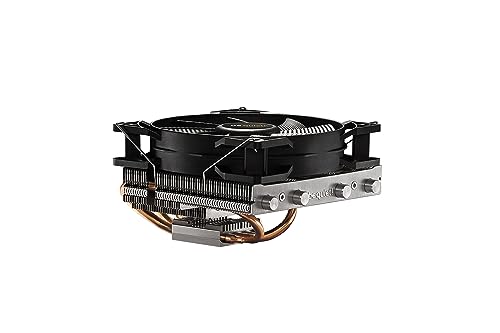 The Cryorig C1 comes with a comparatively larger fan of 140 mm size.  It can be used to accommodate CPUs with TDPs up to 140W.

It is a great option for mild or even greater overclocking.  However, it’s a bit pricier than some other options.

The Cryorig C1 features the Cryorig XT140 140mm fan that helps in cooling the fins of the cooler. Moreover, the fan is 13mm thick and can attain speeds of 1300 RPM, while delivering 24 dB(A) of noise.

The C1 is rated to have produced 65 CFM, and is also able to deliver 1.49 mm H2O of static pressure when used at its full speed.

This CPU cooler also features 6 Pure Copper heat pipes that are distributed at the heat sinks. Also, this cooler comes with 4 double TDP U-Type heat pipes. These are u-shaped pipes which go into the denser secondary heat sink to allow better cooling.

It also comes with the MultiSeg mounting kit. This makes it easier to install this cooler.

Moreover, the Cryorig C1 supports both Intel and AMD-based systems. However, it is not a suitable option for AM4 users as it does not support these AM4-based systems. 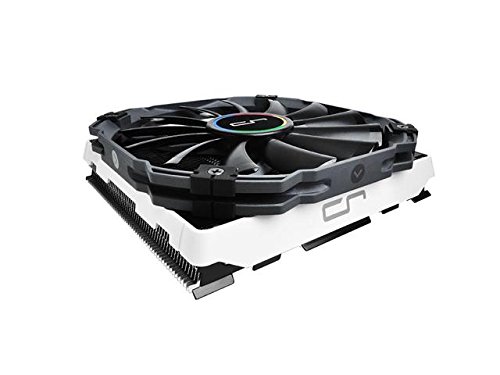 The Thermaltake’s Engine 27 is a uniquely-designed, low-profile cooler out there.

It is a small CPU cooler. It has a height of 27 mm, which makes it a suitable option for ultra-slim PC builds as well as for HTPC, POS terminals and mini PCs.

This CPU cooler features an all-metal design, with a copper base and nickel plating. This allows the heat to dissipate better.

The fan is small and is of the size 60mm. It is an ideal choice for small form factor applications. Moreover, the cooler features a built-in PWM fan with metallic blades and fins design.

So the Engine 27 works at a low noise level without having to compromise on the cooling performance. 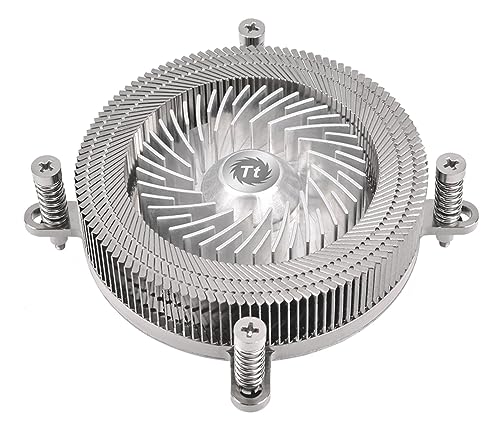 The Alpine 12 is not the smallest cooler and has a height of 77mm.

The ARCTIC Alpine 12, however, is powered by an updated 0.06A motor that operates at 2,000 RPM. Therefore, the cooler operates more efficiently than some other options.

This cooler features a high quality bearing, and as a result, less heat is developed. Moreover, the motor operates at a lower temperature of 10 °C. And so this helps in increasing the lifespan of the fan.

Not only that but these features also allow the fan to save energy; they lower the temperature and minimize the vibrations without having to compromise on the performance.

The Alpine 12 comes with a push pin for easy installation, no other tool is required. 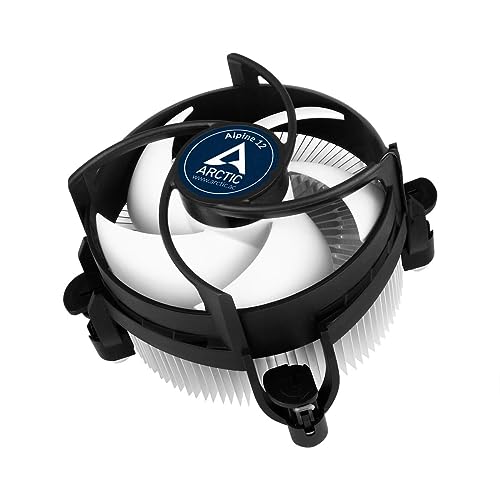 Low profile CPU coolers are extremely important if you want to keep your computer system running in top condition. Usually, overheating of processors is what leads to the short lifespan of these systems. Hence, CPU coolers are needed to keep the temperature of the CPU in check.

The BeQuiet coolers are some of the best coolers you could opt for. The BeQuiet! Shadow Rock LP is a low-profile cooler that can accommodate 130W TDP and is an extremely silent device. This cooler is equipped with a high-quality par and is a great performer.

Plus, you can install it easily without any issues. It’s definitely one of the best low profile CPU coolers that you must consider when making a choice.